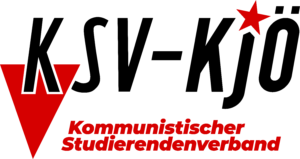 In the past few days the students of Austria have developed significant actions in the struggle against the Bologna Process and its impacts of privatization in the Austrian educational system.

These actions, massively participated by the Austrian students, are crucial for defeating the European Union, World Bank and World Trade Organization’s imperialist strategy to prevent the children of the working class to ever access the highest levels of education, knowledge and culture.

The same imperialism that destroys and invades countries and makes millions of people starve to death in a world where the food production is actually higher than the needs of the world population, wants the future generations to be an army of silent and non-critical workers, whose only goal of life is to contribute to the concentration of wealth and increase of profits of the major economic groups.

WFDY believes that the so called “Bologna Process” is a tool of imperialism in a way to build an educational system according to the aims of the imperialists and in full contradiction with the rights, wishes and needs of mankind.

All through Europe, the consequences of the implementation of the Bologna Process are an evidence of the wish of imperialism to privatize and narrow to maximum levels the access to Education, particularly to wide knowledge and to the ability of creative development of futher knowledge.